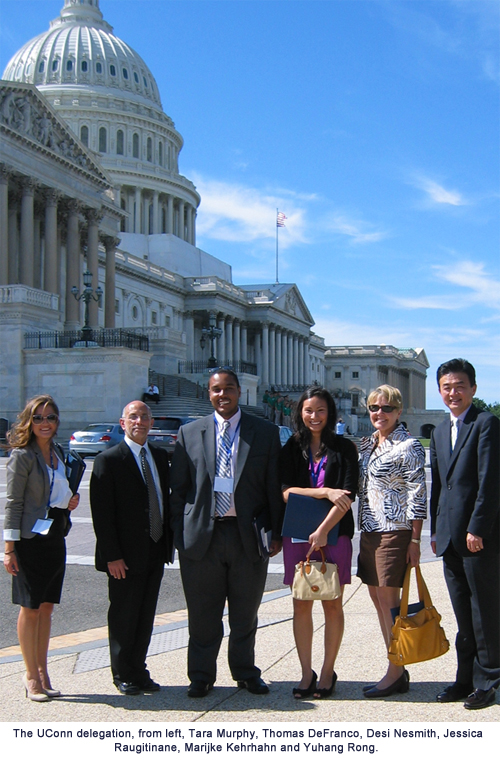 Dean Thomas DeFranco invited them to join him for a Day on the Hill, an annual event organized by the American Association of Colleges for Teacher Education (AACTE).

Ms. Raugitinane, the 2012 recipient of the Alma Exley Memorial Scholarship, recently completed her junior year in the five-year Integrated Bachelor’s and Master’s Program at the University of Connecticut. She is home for the summer in Alexandria, Va.

Mr. Nesmith, honored as an Alma Exley Scholar in 2000, is principal of Metacomet School in Bloomfield, Conn. He holds bachelor’s and graduate degrees from UConn.

Joining them was Tara Murphy, a 2006 graduate of UConn, who has taught for six years at a public elementary school in Fairfax County, Va., where she was named the First-Year Teacher of the Year. Also participating were Associate Dean Marijke Kehrhahn and Assistant Dean Yuhang Rong.

“I am extremely honored to have been a part of this event,” she said. “I learned so much about education and the politics affecting it. I am now more motivated to continue learning about educational politics so I can be an effective advocate for education and voice for my college peers.”

Dean DeFranco said the group’s main message was that Congress should not paint all teacher-preparation programs with the same negative broad brush stroke. Rather, he said, Congress should identify centers of excellence and use resources wisely in encouraging the sharing of best practices.

Mr. Nesmith, Ms. Raugitinane, and Ms. Murphy shared with the congressional aides some of the lessons they have learned from the Neag School, and described why the school has been producing effective educators.

The group also met with a number of the representatives of other educator-preparation programs who were attending from 34 other states.

“This was a great opportunity to meet and share ideas and concerns with educational leaders from around the country,” Mr. Nesmith said. “And when we visited the congressional offices, we had the opportunity to let them know about the impact of the Alma Exley Scholarship Program.”

How to Apply The program annually awards one scholarship of at least $6,000 to a student of color in an accredited teacher-preparation program in Connecticut. The deadline each year is October 31. Learn about the application process.
Contact For more information, please contact the Community Foundation of Greater New Britain, which administers the program.